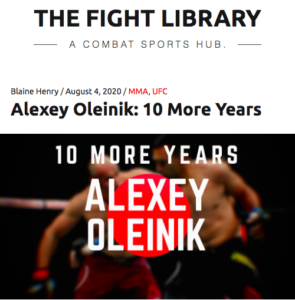 Oleinik is coming off of a win over former heavyweight champion, Fabricio Werdum, at UFC 249. The fight was looked forward to by many fans due to the level of grappling to be seen at the fight. But, Oleinik kept the fight standing most of the time, using his absurd 80″ reach to wail on Werdum. He pointed out that the fight isn’t a grappling fight and that he is a mixed martial artist.

“Yes, Werdum and I had a great fight. We fought with him striking, wrestling and grappling. I can work standing, I can work on the ground. I don’t know what to use in a fight, it depends on my opponent. I can work everywhere.”

Oleinik is prepared for the toughness and power of Lewis and plans to approach it like he does any other fight: smartly.

“Derrick Lewis hits hard, maybe the hardest in the UFC. I have to do my camp for a couple months. You can work with hard striking with only your mind and your technique. That’s how I’ve prepared for this fight.”