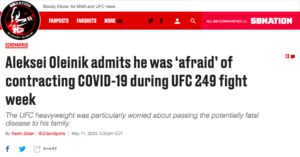 Despite the UFC touting its health and safety protocols for fight week in Jacksonville, Florida, Aleksei Oleinik admitted he was still ‘afraid’ of contracting COVID-19.

The UFC heavyweight, who defeated former champion Fabricio Werdum by unanimous decision on the UFC 249 prelims, told tass.ru afterwards that Ronaldo ‘Jacare’ Souza’s positive test on Friday evening caused him to be concerned about potentially contracting the disease.

“I was afraid that I would bring this infection home. But since [Jacare’s positive test], they tested everyone, I didn’t refuse to fight. And so yes — I was afraid.”