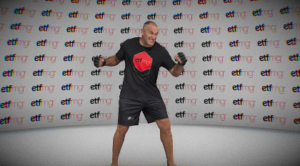 Alexey “The Boa Constrictor” Oleynik has been steadily preparing for his next fight on June 19th’s UFC Fight Night at the Apex in Las Vegas. He is featured on the Main Card to battle a young, up-and-coming fighter, Serghei Spivac in the Heavyweight Bout. Oleynik, the only fighter in history to win bouts in four decades, is looking to reel in his 60th career win, as he is currently at 59-19-1.

“I will be ready,” Oleynik said. “Serghei is a good young fighter and I know they have been studying my career.”

Alexey was recently the focal point of a photo shoot done in New York, organized by his official financial sponsor, ETF Managers Group (ETFMG). The shoot wasn’t your average booking… Alexey was filmed on a new, state-of-the-art 3D camera, did a video interview, and posed for stills with a live boa constrictor, by famed photographer, Jim Salzano.

“It was great to work with ETFMG and Alexey on this project,” said Salzano. “Collaborating with Scheimpflug and John Engstrom to capture Alexey in 3D was a great experience and we love the results.

“We used 128 cameras tethered to 25 computers and a main frame to produce a 3D image that the viewer can interact with. I’m really excited by the possibilities this new technology will offer us and our clients.” 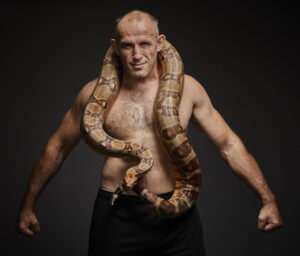 Alexey serves as a brand representative for ETFMG, a $7B thematic ETF (exchange-traded fund) issuer based in Summit, NJ, promoting several of its ETFs, including MJ, the first U.S. and the world’s largest global cannabis fund, and GAMR, the first ETF to target the video game industry.

“Alexey is a respected and accomplished athlete in and out of the octagon, and our partnership with him has provided exposure to a target audience that is often overlooked by our competitors,” said Sam Masucci, Founder and CEO of ETFMG. “We look forward to cheering on our Heavyweight champ this month.” 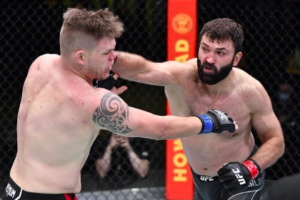 Last month, Andrei “The Pitbull” Arlovski defeated Chase Sherman in UFC Fight Night on April 17th, by unanimous decision. What started out as a slow fight, ended in a big finish. Arlovski is not slowing down, which proves that age is just a number.

This win ties the 42-year-old heavyweight champion for fourth place on the all-time UFC wins list, and made him one-of-two fighters in UFC history to record 20 wins in a single weight class, according to ESPN. He has now won 20 fights during his 21 years of fighting in the Octagon. Arlovski’s first official UFC fight was in April 2000, and he won his 20th fight in April 2021. He is also third all-time in UFC appearances.

“I thank God, my family, Dana White, First Round Management, American Top Team, my fans, and many others… for the opportunity to step into the octagon again,” Arlovski posted on his Instagram account after the fight.