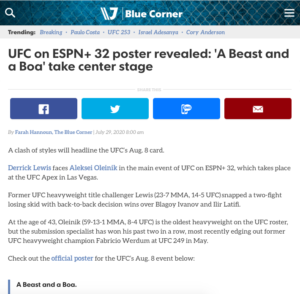 UFC on ESPN+ 32 poster revealed: ‘A Beast and a Boa’ take center stage

A clash of styles will headline the UFC’s Aug. 8 card.

Derrick Lewis faces Aleksei Oleinik in the main event of UFC on ESPN+ 32, which takes place at the UFC Apex in Las Vegas.

At the age of 43, Oleinik (59-13-1 MMA, 8-4 UFC) is the oldest heavyweight on the UFC roster, but the submission specialist has won his past two in a row, most recently edging out former UFC heavyweight champion Fabricio Werdum at UFC 249 in May.

Read the full article and check out the official poster on MMA Junkie here.